JavaScript seems to be disabled in your browser.

You must have JavaScript enabled in your browser to utilize the functionality of this website. Click here for instructions on enabling javascript in your browser.

Here you will find a brief review of the rules for the Magic: The Gathering card game in Danish!

Basic
Each player has 20 lifespoints, usually just called life . If you smoke down to 0 (or fewer) lives, you lose the game. If you play 1 against 1, you win the game as soon as your opponent loses.

To get your opponent down to 0 lives (and to make sure you survive), use a variety of cards:
- Countries are you on the table and you can use them to pay for other cards;
- Creatures ("creatures") you put on the table and they can attack your opponent or block against attack from opponent's creatures;
- Instants ("instant magic") and Sorceries (shortcomings) are cards you use once to get a magical effect - instants are special because you can play them On your opponent's trip;
- Artifacts ("magic objects") and Enchantments ("enchantments") you put on the table after which they have different magical effects that either work all the time or only work in Certain situations; - Planeswalkers (mighty magicians who can help you) put on the table after which they can be activated once per trip to make powerful magic effects. Some of the strongest and most rare cards in Magic are Planeswalkers, but watch out - your opponent can also attack them with his creatures!

Each card has some different parts:
1. Card Name.
2. Card mana cost . When playing a card (in addition to countries), first pay for it with mana by tapping its countries - each country can usually be dropped to give one mana of a particular color. If there are one or more mana symbols (

), the card requires so many mana of the colors. If there is a number, the card requires so much extra mana - but you can choose which colors you want to use yourself. The card's mana cost also determines the colors the card is - a card that only requires blue mana is blue; A card that requires green and white mana is both green and white; And a card that does not require colored mana is colorless (eg countries).
3. Card picture.
4. Card type (s) and subtype (s) .
5. Card expansion symbol. This shows which series the card is from (different series have different symbols), and how rarely the card is (Black = Common, Silver = Uncommon, Gold = Rare, Orange = Mythic Rare).
6. Card text box . Here are the special effects the card has. At the bottom of many cards there is also a flavor text with slash - this is a little background information about the card but has no effect on the game.
7. If the card is a creature, its power and toughness - a creature gives as much damage as its power and if it itself gets as much harm As its toughness during one turn, it dies. If the card is a planeswalker, there is how many loyalty counters it starts with when you play it.
8. Bottom of the card is collector information - this includes the card number in the series, who made the picture to the card, etc.

9. The rare series of recent series has a holographic stamp here. 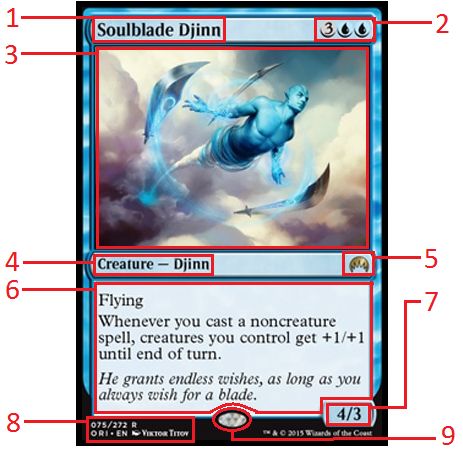 The game has different zones on the table:
- The center of the table is the battlefield where you and your opponent put your card in play.
- Your library is your heap of cards.
- Your hand are the cards you are playing as you can play.
- Your graveyard is how short smokes are when they have been used or destroyed.
- In addition, the exile and command zones are used by some cards.

The game is divided into tours (you and your opponent are changed to turn) and each turn is further divided into phases ("phases") and steps ("step"). Your trip looks like this:
1. Beginning Phase : The start of your trip is divided into three phases: 1a. Untap Step : First unbutton you all of your cards on the table that were lost. To show that a card is dropped, turn it sideways. Once unblocked, turn it over again.
1b. Upkeep Step : Some cards do certain things in your upkeep.
1c. Draw Step : You drag the top card from your library.
2. Main Phase 1 : Here you can play cards from your hand. You can play one country from your hand per turn.
3. Combat Phase : Here you attack your opponent with your creatures, and your opponent then chooses to block with some of his creatures. Every creature that is in conflict with other beings will harm the beings to which it blocks or is blocked. Creatures that are not blocked directly harm your opponent. We'll explain later how combat works exactly.
4. Main Phase 2 : Here you can play cards from your hand again.
5. End Phase : This is the last chance to play instants before the tour goes on.

To play a card:
1. Show the card to all players. If the card is a country, lay it on the table. You must play 1 country per trip. If the card is not a country, continue to 2nd
2. Tap your countries (turn them sideways) to pay for the card. The card costs what is stated in its mana cost, as explained above. If there are 3 and two blue mana symbols, the card will cost two blue mana and three mana that you can choose, for example, to tap five Islands, or two Islands and Three Mountains.
3. When you have paid for your card, place it on the table where everyone can see it. Your opponent can now respond to (ie answer) your card by playing his own - but only if the opponent plays an Instant or a Flash with Flash.

4. If your card is a permanent (artifact, creature, enchantment or planeswalker), place it on the battlefield together with the rest of your cards. If your card is an instant or a sorcery, it has an effect on the game and is then added to your graveyard.

How to work abilities:
- There are three types of abilities:
1. Activated abilities are abilities that you activate when you want it. All activated abilities have a colon (a ":") in the text - to the left of the column, what the price is to enable the ability (eg manascript symbols just like playing a card or sacrifice a creature) To the right of the column is the effect.
1a. When you enable an ability, you immediately pay its cost, after which your ability is placed on the stack (see more about the stack below). Then its effect is taking place.
2. Triggered abilities are capabilities that occur under certain circumstances (eg when you start your turn or when one of your creatures dies).
3. Static abilities are abilities that work all the time (eg "Creatures you control get + 1 / + 1").

Stacken:
- One of the more advanced parts of Magics rules is the stack. The stack is a "pile" of cards that consists of the spells and abilities that have been played but have not had effect yet.
- The stack works as follows: Each time a player plays a spell (ie anything but a country) or activates an activated ability and each time a triggered ability is triggered, the spell or ability is added to the stack. This is done physically by putting a spell (in the form of a card) on the table so everyone can see it. You can control which order the various spells and abilities on the stack were laid on - When a spell or ability is on the stack, players can respond to (answer) it by playing their own instants or cards with Flash. All other cards require that the stack is empty.
- If both players (always the one who is not lucky and then the one who lucky) say they will not respond to a spell or ability, it has its effect.
- If the stack applies to the rule of thumb, "first in, last out", which means that the spell or ability that was last played has effect first. You can imagine that players are switched to put spells and abilities into a pile after which you have to remove the cards at the top of the pile. In this way, you can save your creatures from your opponent's spells and abilities if you have an instant or an activated ability ready that you can use as an answer. Remember to keep track of which order spells and abilities put on the stack in.